Three or four years after college, I realized a desire to live my life as if to create a work of art.  The lofty desire came partially from reading some of Auden’s early poetry.  I hadn’t read anything by him, except for “The Shield of Achilles” assigned by Rosamond Spring in a Great Books college class. Prompted by a scene in the movie “Four Weddings and a Funeral,” wherein a minor character reads out loud “Funeral Blues,” I sought out some of Auden’s voluminous poetry and prose.  I don’t think I understood half of it, but I was definitely taken by the impressive range of his mind and of course his poetic lyricism.

Among the biggest influences is the poem “1929,” written when Auden was twenty-two and including four separate sections. The best-known line of this poem is the opening one: It was Easter as I walked in the public gardens.  For me, however, the most thrilling lines come from the second section, which Auden wrote in Berlin.  This section opens with the following lines.

Coming out of me living is always thinking,
Thinking changing and changing living,
Am feeling as it was seeing –

Living, thinking, changing, feeling, and seeing: it is a kind of cosmic if not mystical unity experienced by the still youthful Auden.  The experience resurfaces at the end of the section.

In me so absolute unity of evening
And field and distance was in me for peace,
Was over me in feeling without forgetting
Those ducks’ indifference, that friend’s hysteria,
Without wishing and with forgiving,
To love my life, not as other,
Not as bird’s life, not as child’s,
“Cannot,” I said, “being no child now nor a bird.”

Without wishing and with forgiving, / To love my life, not as other.  That is, to take upon the burden of choice and choose to make a commitment to one’s life amidst the disruptions, distractions, and contradictions of modernity. (There seems to be quite a bit of the early Kierkegaard in the early Auden.)  Between the end of the Cold War and 9/11, my Nineties were of course very different from Auden’s politically tempestuous late Twenties and Thirties.  Yet there were similar issues such as that of living as an independent and autonomous self in the modern bureaucratic and materialistic mass society.   “To love my life” struck me then as both resolution and commitment.

Above: I couldn’t find a photo of Auden in 1929, but here are photos from 1926 and 1931, when he was nineteen and twenty-four.  Contrast the youthful face in these photos to the face in his early sixties (below), which he himself compared to “a wedding cake left in the rain.” 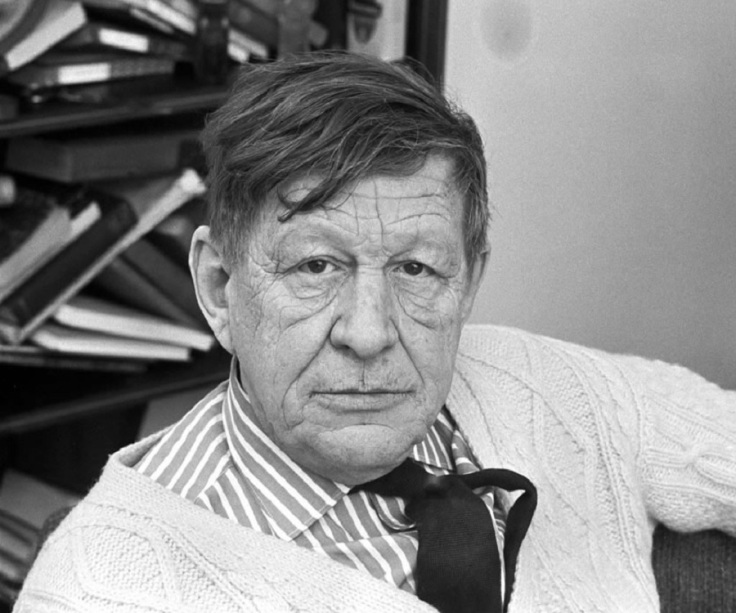 In my case, it was making a resolution to embrace my life in its totality: loveliness and ugliness and all in-between, and as it had been and is and will be.  It was also a commitment to live my life as if to paint a series of paintings for display on the same wall, or create a set of sculptures in a public park or a large private garden, or make a mosaic of floor tiles in varying patterns for a common room.  The subsets may appear distinct from one another. Upon close inspection, however, they add up to a discernible and coherent whole.

I can’t say whether my life has amounted to anything remotely like a work of art.  But the desire has kept me conscious of continual effort and self-examination, plus, on occasions, self-interpretation. (If living is like creating artworks, interpreting life is like curating those works)  Like any other life, there are different ways to interpret mine.  The commonest way is to view it in a chronological order, and the chronology of my life is consisted of ten phases.  These phases are uneven in length and often different in focus, but I’d like to think that there is a common thread that manages to tie them together and endow them with sense and meaning.

1. Birth and first years of life in the former South Vietnam
2. Six years under communism in unified Vietnam
3. Fifteen months in two refugee camps in Indonesia
4. First five years in the U.S., including high school, in Minnesota
5. Four years of college and seminary, also in Minnesota
6. Full decade in Seattle, mostly L’Arche but also work in catering
7. The “year in the wilderness” in DC, Massachusetts, and Minnesota
8. Six years of graduate studies in Indiana
9. Five non-resident years in California, including the beginning of marriage and a second stint at L’Arche in Orange County
10. Teaching at Pepperdine since 2013

Except for one, I was generally well engaged with the people in all these phases.  The exception was my high school years, #4 in the chronology.  Four years ago I wrote a reflection about my high school experience, and have reposted it on this blog with a few background notes.   Briefly, as a newcomer to America that spoke little English, I observed rather than engaged and never had chance to know my high school classmates and teachers as it could have been in other circumstances.

Were my life comparable to a set of paintings, the painting related to high school was the least finished. Were it a sculpture in among a group of sculptures in a park or a garden, it was less carved and chiseled than any of the others.  Or, if it were like an excavated mosaic of tiles with varying patterns on a Roman or Byzantine bath floor, the high school pattern is blurrier than all other rest.

What could be done to make the pattern and sculpture and portrait less blurry?  For a remedial measure, a few months ago I thought of a small project, meant to be occasional and interesting and hopefully also fun to do.  That is, I’d like to take advantage of my travels in the next few years to meet, catch up, converse, and interview some of my classmates about their lives now.  I haven’t seen most of them since graduation.  Thanks to FB, I learned that my classmates are spread all over Minnesota and the U.S. (plus at least one living aboard for years now).  They have led varied and productive lives since the that evening’s graduating ceremony at the Mayo Civic Center.

Wouldn’t it be cool, I thought, to have a series of conversations so I’d know them more  – and they me?  (And perhaps former teachers, if the opportunity arise.)  It can be a way for me to reconnect with the past: to fill in the details on the self-portrait made during those four years. Or to chisel more clearly the block of high school marble.  Or to apply modern tools to sharpen the details of the one blurry pattern on the excavated tile floor.

A short visit to the Twin Cities last month allowed me a chance to begin this series, as I met up with a couple of classmates, and had a fun time chatting with them (separately).  It was a pleasure to see them after so many years, and to talk about our lives in high school, the paths we took since then, and the lives we lead today.  I recorded our conversations with their permission.  Back to California, I have transcribed the conversations and edited them for clarity and organization, and will post them later on.

I wish to thank Tim Bromelkamp and Teresa Thein Meschini for indulging my unusual request.  Really, I don’t imagine many people in America or elsewhere that got the sort of messages that Tim and Teresa received from a classmate that they knew little back then, asking to sit down for a one-on-one conversation even though we haven’t seen or been in touch for more than a quarter of a century.  (I received an email from Tim two or three years ago after he read the reflection, and I got in touch with Teresa less than two months ago.)  Their openness helped me see and understand a little better the high school world that I experienced back then, adding a few details to that blurry painting or sculpture or tile pattern.  Of course, the conversations also helped me know them a little more.  It was indeed very nice to talk about the journeys we have taken since graduation, plus the joys and challenges that we face today regarding work, raising kids, community, etc.

Aside from the pleasure of conversation and catching up, then, I hope that this series celebrates my classmates, the paths they have taken, the accomplishments they have gained, and the joys and struggles in the commitment that they have made and the lives they have led.  It is meant to recollect the shared experience of attending a Catholic high school in southeastern Minnesota.  But it is meant also to highlight the variety of journeys that they (and I) have taken since graduating from high school, if not also the shared humanity found amidst that variety.