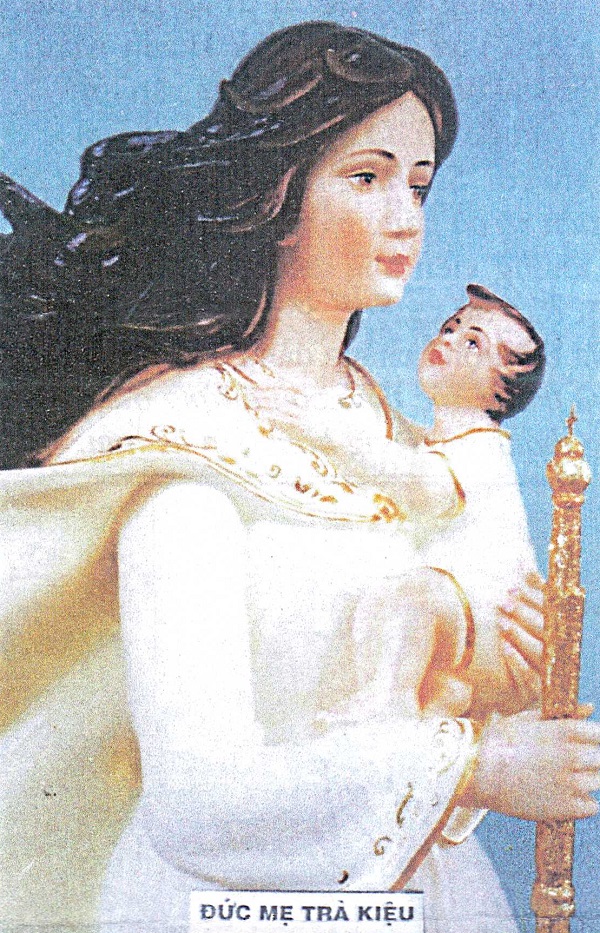 I’ve posted about Our Lady of Fatima and Our Lady of La Vang in Vietnamese history, but not yet about Our Lady of Trà Kiệu. Though less-known than Fatima or La Vang, this devotion was historically significant and complex due to the interaction among three groups: Vietnamese Catholics, Vietnamese anticolonialists, and French colonists. This devotion began during a wave of anti-Catholic violence in 1885 led by the elite anticolonial movement Văn Thân. According to legends, the Virgin Mary appeared on top of the church of Trà Kiệu during a battle between Catholics and members of this movement and protected the faithful from destruction by the larger Văn Thân force.

One reason for the lesser popularity of this devotion was the fact that this event occurred nearly a century after the persecution at La Vang. Another reason, I surmise, had to do with the complicated triangle among Catholicism, colonialism, and anticolonialism. Colonists and Catholics (including missionaries) did not necessarily share the same objectives at all. Colonists sought profit and prestige for themselves and the Third Republic. Catholics sought stability for their local communities and global ties to the universal church. Indeed, a number of Catholics actively opposed colonialism after the turn of the century. Nonetheless, many non-Catholic Vietnamese then and later associated Catholicism to colonialism and considered Vietnamese Catholics to be supporters of foreign powers.

In any event, Trà Kiệu happened to be near an area of militancy during the turbulent 1880s then the warring 1960s and early 1970s.  It is ten miles from Mỹ Sơn, the most important site of Cham architecture and relics in Vietnam. It is about 25 miles to the south of Đà Nẵng, which was the second-largest city in South Vietnam with a major port city plus a large U.S. military base during the war. As a result, the small town was never far from military operations by all sides. This context explains for a most fascinating occurrence in May 1971.

Vietnamese Catholics had organized a number of Marian congresses and festivals before 1940. As far as I know, though, there weren’t any major ones during the First Indochina War (1946-1954) due to warfare, travel difficulty, and other reasons. Although Pope Pius XII had declared 1954 to be a Marian year, dramatic military and political developments during that year kept Vietnamese Catholics from celebrating it at a large scale. Following national division, however, South Vietnam witnessed a number of major festivals and congresses, both national and regional. In 1955, for example, La Vang resumed the triennial festival that was disrupted by war and revolution during the 1940s and early 1950s. Until the fall of Saigon, this festival was held four more times. The 1958 edition coincided with the Vatican’s celebrations honoring the centennial of the apparitions at Lourdes while the largest edition was organized and headlined by Ngô Đình Thục in 1961.

There was also a national Marian congress held in Saigon over three days in February 1959. This event included the dedication of a statue of Mary Queen of Peace in front of the Notre Dame Cathedral Basilica. The same month saw a Marian festival in Trà Kiệu: the topic of this post. It was in fact the second of two festivals organized by the Diocese of Qui Nhơn, with the first having occurred eight months earlier in June 1958. It is not clear how many people attended the three-day festival, but a contemporary report stated that the organizers cleared enough space for 100,000 people. The Catholic authorities had planned for a triennial festival similar to La Vang, which meant that the next gathering would be in 1962. But it did not happen for two reasons. First was the bishops’ preparation for the first session of the Second Vatican Council, then their attendance later that year. Second, they had to prepare for the division of the Diocese of Qui Nhơn into two smaller dioceses, Qui Nhơn and Đà Nẵng, which occurred in the next year. The division also meant that Trà Kiệu belonged to the Diocese of Đà Nẵng.

Forward to the early 1970s, when the Vietnam War had turned conventional in military strategy. During late 1970 and early 1971, Phạm Ngọc Chi, the bishop of Đà Nẵng, had several discussions with his priests before deciding to hold the first Marian festival at Trà Kiệu since 1959. Under the leadership of Bishop Chi, festival coordinator Father Nguyễn Quang Xuyên, and various committees, the diocese prepared an impressive program for the last four days of the month: one “pre-festival” day in addition to the three main days. Each of the three main dates was dedicated to specific groups of Vietnamese: for unity among Vietnamese; for youths and young adults; and for the poor, disabled veterans, and victims of warfare. A number of physical upgrades and new constructions took place. Several bishops were scheduled to say mass and lead processions while Catholic Action organizations and religious orders were expected to show up in large numbers. The months leading to the festival saw prayer and studies sessions at the parish level in the diocese. Although the festival was primarily regional, it could have easily turned more national had conditions been more conducive for travel.

The first two days of the festival, May 28 (pre-festival) and 29, went generally as planned. It began to change, however, during the early hours of May 30, which was Pentecost Sunday. It was “not yet four in the morning” according to a report when the faithful woke up to the sound of cannon-shelling and shooting from “smaller weapons” in the distance.  Over loudspeakers, festival organizers attempted to assure them that the fighting was far away and urged them to sleep again. Most decided to get up and get ready for morning mass anyway. After mass, unconfirmed news spread that communist forces had occupied a nearby village and they were only 300 meters from the Trà Kiệu Church near the Marian Center at the festival. Remarkably, most of the vehicles that transported youths and young adults from Hue, Saigon, and other cities arrived safely to the Center that morning. An estimated 60,000 people were at the festival that morning.

Fighting continued throughout the day, including the two-hour duration of the solemn mass of Pentecost Sunday that began at 11:00 AM. Presiding over this mass were the archbishops of Saigon and Hue along with Bishop Chi. Also present were the president of the Upper House (equivalent to the U.S. Senate), an unspecified number of mayors and members of the Upper and Lower Houses, and other dignitaries. The archbishop of Hue gave a thirty-minute homily on lay apostolate and referenced the Virgin Mary as a model for missionary work “in any situation.”  The homily was punctuated by “earth-shaking” sounds of shelling, shooting, and bombing from less than a mile away. A bullet shot through the clerical robe of the priest in charge of choral music and made a small hole, yet he wasn’t even aware of it until someone picked up the bullet from the ground later.

The fact that the ceremony went on in the midst of fighting was certainly unusual. It was also risky.  At the end of mass and after consultation with the secular authorities, Father Xuyên made a public announcement to encourage the faithful to leave the site and return home after lunch. Which most of them did. Fighting continued into the early evening, especially around 4:00 PM when there was more bombing in addition to the fierce shooting on the ground. There was one recorded civilian fatality, an eight-year-old local boy who died from bombing. Among the pilgrims from afar, there were “about ten people” who were wounded during the return but no deaths. The fighting calmed down around 6:00 PM, when the church bells announced the beginning of Eucharistic adoration. The next day, Bishop Chi presided over the closing ceremony and the bishop of Qui Nhơn gave the homily. Not surprisingly, the crowd was much smaller at only about 3000 people even though the fighting had stopped.

Reports following the fight indicate that the communist force was consisted primarily of the 38th Regiment from the People’s Army. There were a smaller number of NLF troops who infiltrated a different village and killed an unspecified number of people, including civilians. Among the military dead were five soldiers from the Republic of Vietnam and 255 communist soldiers. (Four were captured alive.) It’s not clear how many communist troops belonged to the People’s Army, but they were clearly in the majority.  It isn’t clear either if the bombing came from the Americans or the South Vietnamese. Hundreds of households were damaged or destroyed by the shooting, shelling, and bombing.

All the same, the scale of destruction wasn’t a surprise because the war was still very violent during the shift to Vietnamization on the part of the U.S.-South Vietnamese alliance and the shift to conventional warfare on the part of North Vietnam. The surprise, rather, lay in the fact that violence and destruction occurred in the middle of a major Marian festival yet the pilgrims didn’t flee until after the midday mass. Imagine that you were among the pilgrims on May 30, 1971.  The experience of celebrating Pentecost Sunday during a fierce battle nearby sounds surreal and bizarre. For the Vietnamese who lived during that period, however, it wasn’t surreal or bizarre at all.  The experience was frightening and horrible, but it was also common among the South Vietnamese and, therefore, all too real.