Here is part one.

“As nearly the same time as the discovery of alcohol,” writes Fernand Braudel in the first of his three-volume work on capitalism from the fifteenth to the eighteenth century,

Europe, at the centre of the innovations of the world, discovered three new drinks, stimulants, and tonics: coffee, tea, and chocolate.  All three came from abroad: coffee was Arab (originally Ethiopian); tea, Chinese; chocolate, Mexican.

Such exchanges commenced and fueled the globalization of food and drinks.  They also led to new recipes, inventions, and rituals in the likes of English afternoon tea and hot buttered rum at Christmas parties.

My favorite drink invention is the dry martini, and I find the once-popular three-martini lunch a fascinating piece of twentieth-century American history where business, masculinity, and indulgence converged rather seamlessly in the postwar era.  Sleek in look and strong in alcohol, the martini just had to be Ian Fleming’s drink of choice for his famous spy, didn’t it?

My favorite martini anecdote has to do with the monk Thomas Merton, who lived in a Trappist monastery in Kentucky – and whose name was invoked by Pope Francis in the speech to Congress during his visit to the U.S. back in September.  Guy Davenport, a professor of English at University of Kentucky and a friend of Merton’s, wrote an amusing essay called “The Anthropology of Table Manners from Geophagy Onward” that includes the following recollection.

The best display of manners on the part of a restaurant I have witnessed was at the Imperial Ramada Inn in Lexington, Kentucky, into the Middle Lawrence Welk Baroque dining room of which I once went with the photographer Ralph Eugene Meatyard (disguised as a businessman), the Trappist Thomas Merton (in mufti, dressed as a tobacco farmer with a tonsure), and an editor of Fortune who had wrecked his Hertz car coming from the airport and was covered in spattered blood from head to toe. Hollywood is used to such things (Linda Darnell having a milk shake with Frankenstein’s monster between takes), and Rome and New York, but not Lexington, Kentucky. Our meal was served with no comment whatsoever from the waitresses, despite Merton’s downing six martinis and the Fortune editor stanching his wounds with all the napkins.

Trappists do not have to abstain from alcohol, and in fact have made some of the finest spirits and beers in history.  Still, Merton’s consumption well exceeded the alcoholic standard at the time. Perhaps the monk could justify it on the basis that he was at the Imperial Ramada Inn for dinner, not lunch.

Food and drinks are perhaps best depicted by the visual arts, sometimes as still life, sometimes for showing consumption, sometimes for supporting a cultural or political current of thought. The Norman Rockwell painting, for instance, employed the Thanksgiving occasion to lend a charming and persuasive hand to the “standard of living” ideology in modern American history.

Film, too, has captured some of the exuberance about the ritual of cooking in the kitchen and consumption at the dining table.  Babette’s Feast, Big Night, Like Water for Chocolate, and Eat, Drink, Men, Women are merely four examples from Denmark, the U.S., Mexico, and Taiwan, respectively.  But a good food movie must be more than a cooking show, and must be about something other than food, as the case in each of these films.

There is of course plenty of eating and drinking in movies that do not feature cooking and eating.  The well-crafted Groundhog Day provides one instance.

More sublime and hilarious is the scene from the 1963 adaptation of Henry Fielding‘s Tom Jones that shows hormonal young Tom and lusty Mrs. Waters masticating on soup, shellfish, poultry, and fresh fruits in complete silence.  Rarely has the association between food and sex been acted out so perfectly in the cinema.

We must credit the actor and actress and director for the brilliance of this scene because it is based on Book IX Chapter V, which tells little about the meal itself.  This chapter is more about seduction by the eighteenth-century Mrs. Robinson – who, in contrast to the cinematic rendition, actually ate “but very little” – than about Tom Jones’ hunger, on which Fielding is compelled to provide a justification.

Heroes, notwithstanding the high ideas [and] however elevated their minds may be, their bodies at least (which is the major part of most) are liable to the worst infirmities, and subject to the vilest offices of human nature.  Among these latter, the act of eating… must be in some measure performed by the greatest prince, hero, or philosopher upon earth; nay, sometimes Nature hath been so folicsome as to exact of these dignified characters a much more exorbitant share of this office than she hath obliged those of the lowest order to perform.

Translation: Don’t hold it against bigger-than-life men who happen to have an enormous appetite for foodstuffs.  Fielding then references none other than Odysseus, who “seems to have had the best stomach of all the heroes.” Odysseus appears in my previous post, and I add that both he and Tom Jones demonstrate their virility through eating, albeit to a smaller extent than sex.  Researchers recently found that men tend to eat twice as much pizza when they are in the company of women than when they are among themselves.  It’s silly to draw any connections to Homer and Fielding. But there it is, another interesting factoid about gender and food.

Henry Fielding names no specific food items other than an “excellent sirloin of beef” and a “bottle of Burgundy.”  Perhaps he doesn’t want to detract our attention from Mrs. Waters?

Heading to the opposite direction, I can’t think of a better example than Thomas Wolfe‘s Look Homeward, Angel, which was published 180 years after Tom Jones and is just as long. 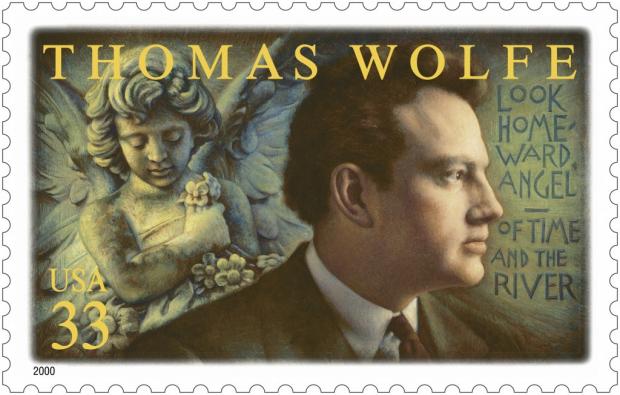 When it comes to an enumeration of various foods and drinks, the Wolfe novel takes the cake, pun fully intended.  Here is a passage described by the protagonist Eugene Gant, the fictional stand-in for Wolfe, about some of the meals in North Carolina.

In the morning they rose in a house pungent with breakfast cookery, and they sat at a smoking table loaded with brains and eggs, ham, hot biscuit, fried apples seething in their gummed syrups, honey, golden butter, fried steak, scalding coffee.  Or there were stacked batter-cakes, rum-colored molasses, fragrant brown sausages, a bowl of wet cherries, plums, fat juicy bacon, jam.

The quantity keeps rolling with lunch and dinner.

He remembered yet the East India Tea House at the Fair, the sandalwood, the turbans, and the robes, the cool interior and the smell of India tea; and he had felt now the nostalgic thrill of dew-wet mornings in Spring, the cherry scent, the cool clarion earth, the wet loaminess of the garden, the pungent breakfast smells and the floating snow of blossoms. He knew the inchoate sharp excitement of hot dandelions in young earth; in July, of watermelons bedded in sweet hay, inside a farmer’s covered wagon; of cantaloupe and crated peaches; and the scent of orange rind, bitter-sweet, before a fire of coals. He knew the good male smell of his father’s sitting-room; of the smooth worn leather sofa, with the gaping horse-hair rent; of the blistered varnished wood upon the hearth; of the heated calf-skin bindings; of the flat moist plug of apple tobacco, stuck with a red flag; of wood-smoke and burnt leaves in October; of the brown tired autumn earth; of honey-suckle at night; of warm nasturtiums, of a clean ruddy farmer who comes weekly with printed butter, eggs, and milk; of fat limp underdone bacon and of coffee; of a bakery-oven in the wind; of large deep-hued stringbeans smoking-hot and seasoned well with salt and butter; of a room of old pine boards in which books and carpets have been stored, long closed; of Concord grapes in their long white baskets.

There’s plenty more, but you get the idea.  The lyricism isn’t Proustian but Wolfean.  It overpowers with nostalgia and especially a quantitative impressionism, ordered according to the seasons of the year, about the digestible and non-digestible alike.

Because I grew up in Vietnam, I didn’t “get” Thanksgiving until my post-collegiate years of living in the L’Arche community in Seattle during the 1990s.  I came across Look Homeward, Angel in the middle of that decade.  So taken by it that I read these passages aloud before the Thanksgiving meal that year.

On that note, I realize that I’ve over-quoted Thomas Wolfe yet haven’t got to the passage on Thanksgiving.  Call it indulgence in quoting during a week of indulgence in eating and drinking.  Note that the story took place well before the Great Depression.  No “Freedom From Want,” this, because there wasn’t yet “want.”

For the Thanksgiving and Christmas feasts four heavy turkeys were bought and fattened for weeks: Eugene fed them with cans of shelled corn several times a day, but he could not bear to be present at their executions, because by that time their cheerful excited gobbles made echoes in his heart. [His mother] Eliza baked for weeks in advance: the whole energy of the family focused upon the great ritual of the feast. A day or two before, the auxiliary dainties arrived in piled grocer’s boxes—the magic of strange foods and fruits was added to familiar fare: there were glossed sticky dates, cold rich figs, cramped belly to belly in small boxes, dusty raisins, mixed nuts—the almond, pecan, the meaty nigger-toe, the walnut, sacks of assorted candies, piles of yellow Florida oranges, tangerines, sharp, acrid, nostalgic odors.

‎Seated before a roast or a fowl, [his father] Gant began a heavy clangor on his steel and carving knife, distributing thereafter Gargantuan portions to each plate. Eugene feasted from a high chair by his father’s side, filled his distending belly until it was drum-tight, and was permitted to stop eating by his watchful sire only when his stomach was impregnable to the heavy prod of Gant’s big finger.

Happy Thanksgiving!  May you be safe and sound notwithstanding the Gargantuan portions on your plate.