For several reasons, I prefer small academic conferences over large ones.  Still, it is good to go to a major annual conference once in a while, which was the case this past weekend at the Association for Core Texts and Courses (ACTC).  “Major,” however, may be inaccurate.   At about 300 attendants each year, the ACTC pales in comparison to the thousands who trek annually to the MLA (language & literature), AHA (history), AAR (religion), AAA (anthropology), ASA (American studies), AAS (Asian studies), AAAS (Asian American studies), ICMS (Medieval studies), AWP (writers and writing programs), and other alphabet-soup biggies in the humanities and social sciences.  The AWP, for instance, typically has 2000 presenters and 12,000 attendees.  (It is not a typo: twelve and three zeros.)  The ACTC is decidedly small potatoes in number and scale.  On the other hand, the relative smallness – let’s call it “medium-sized”- probably contributed nicely to my enjoyment of the event in Atlanta. 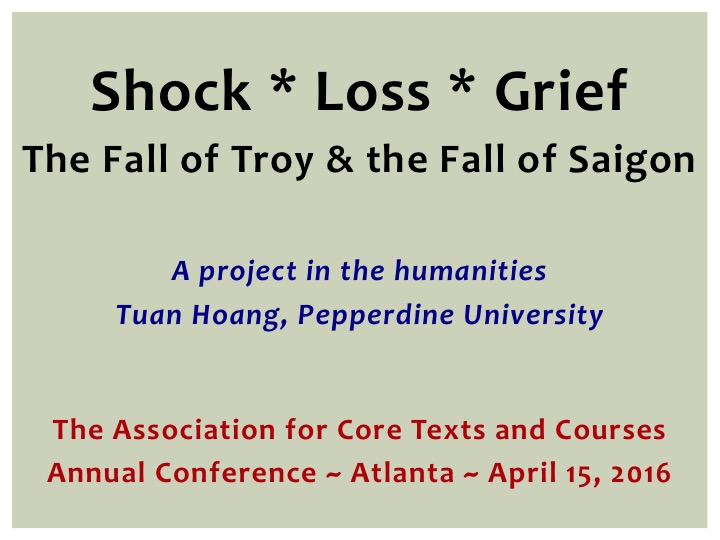 As indicated by “Courses” in its name, the ACTC is distinguished for an emphasis on teaching.  There are of course many panels about teaching at the biggies.  Proportionately speaking, however, I don’t think any could match the teaching-relevant papers at the ACTC.  The format is also different. Most presenters submit their papers individually, which are then sorted out and organized into panels according to topics and abstracts.  To foster conversation, each paper is no longer than five pages and there are no discussants so there will be plenty of time for interaction among presenters and audience.  The audience-friendly format also induces people to stay put at a panel for the duration rather than heading to another one after hearing a particular paper.  It is all the more remarkable because some of this year’s panels were scheduled for two and a half hours. At two such panels that I attended, only two out of about thirty-five people left in the middle for another one.

Atlanta 2016 was my second time at the ACTC.  My first attendance was LA 2014, which was sponsored by my home institution.  Unfortunately, it took place during a very busy time in my first year at Pepperdine and I could come for only a short time.  This year, however, I went to all five plenary sessions and six breakout ones. Below are some of my observations about and reactions to them.  (Click here for the schedule in PDF.)

In short, one could say that the ACTC is a teacher’s and a reader’s conference.  It has been around for over twenty years, and hopefully will continue for at least just as long.  Interestingly, this conference was the first one for me that took place neither in a downtown nor a university campus, but at a suburban-like business district of a major city.  The registration was steep at $400, but it included six meals.  The food was quite good; it was also the first time that I saw cannoli served at an academic conference.  Also refreshing is the fact that I didn’t see anyone take a photo, selfie, or group selfie, at least not in the confines of the conference.  I didn’t take any photos either, hence no visuals in this post except for the title of my presentation on top. Will see if this book project will be boom or bust, but at least it has a cool title for the time being. 🙂

I should add that it was great catching up with my fellow Notre Dame grad Emma Cohen de Lara (University of Amsterdam), a tireless promoter of core texts in Europe and now a board member of ACTC.  As an early-career faculty (if older than most), I also found it encouraging to see a number of junior faculty and graduate students giving papers and participating in the discussions.  A strong organization needs both old and new blood.  Fairly new myself, I hope that the ACTC will encourage the infusion of younger academics, including minorities, into its core (no pun intended); and that younger academics will continue to participate and keep these conversations alive and lively in the years and decades ahead.