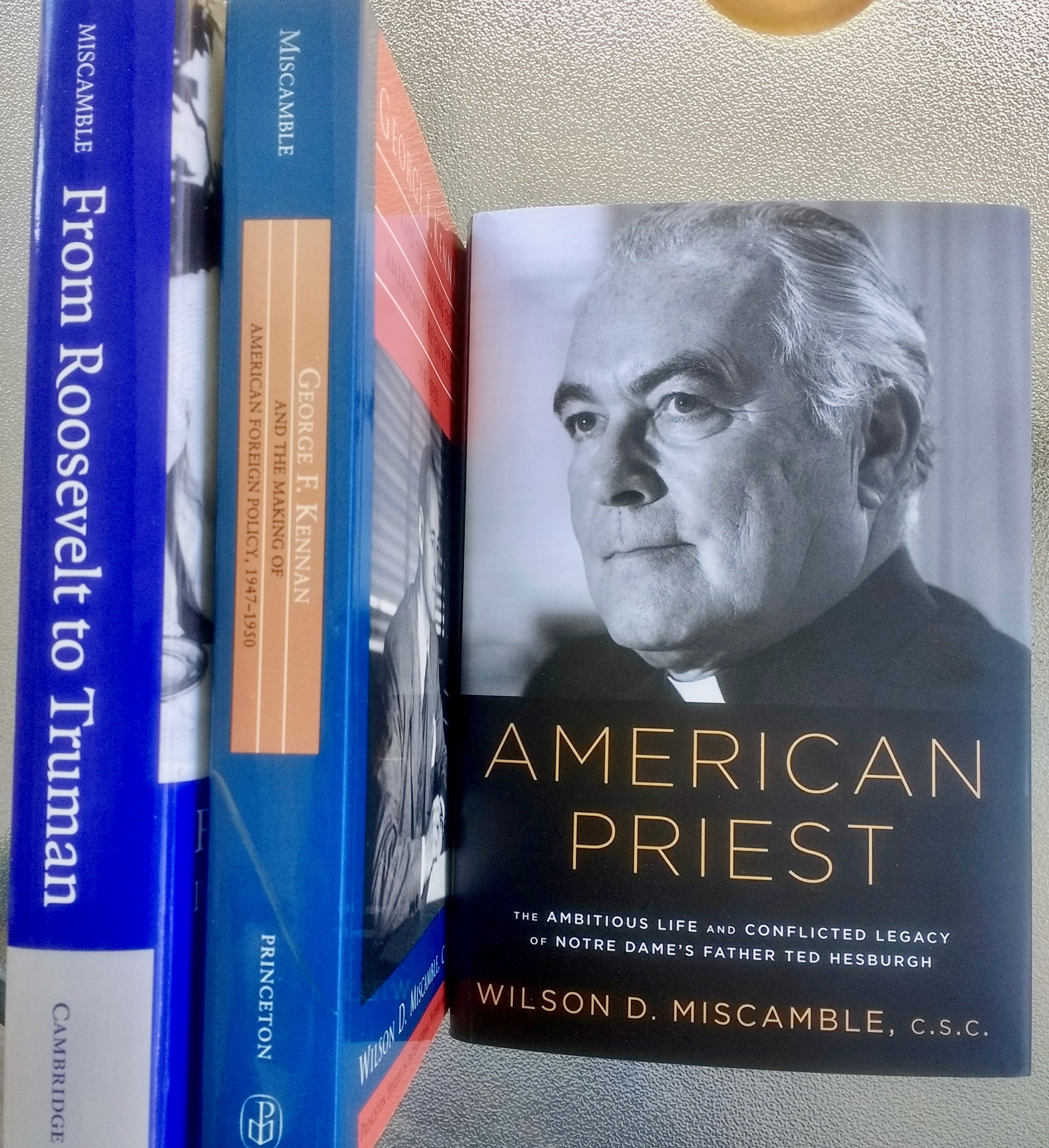 Since the author of this new book was my dissertation advisor, I won’t blame anyone for assuming that I’d be favorably predisposed to and play homer on his brand new biography of the former president of the University of Notre Dame.

True enough, I highly recommend that you obtain a copy and read it. Perhaps you’d read one section before bed each evening, for there are thirty-six sections from nine chapters (plus the preface and conclusion) that you can read over five weeks. Perhaps you can add it to your summer reading list. Or, read it in another way to your convenience. However you read it, and whatever else you think about the subject of the book, I’d wager that you will enjoy this biography a lot.

I can’t compare this book to earlier biographies of Fr. Hesburgh because I have not read any of them. But the most important Hesburgh biography before this tome, Michael O’Brien’s Hesburgh: A Biography (1998), was apparently too “workmanlike” even for Fr. Hesburgh. Be assured that the new biography isn’t “workmanlike” at all, but is quite engaging. The biographer wrote it not only for the general, educated reader, but his selection of stories and episodes are also very arresting. It is also well organized: four of the early chapters are about Fr. Hesburgh’s leadership at Notre Dame while the next four are about his service to the papacy and the American presidency.  Last but not least, the cost-conscious buyer may be happy to know that it is currently sold on Amazon at $18.30, which is a nice discount from the publisher’s listed price of $28.00. Amusingly, it is also listed as Amazon’s #1 seller under the category of “football biographies.”

Most of all, the book gives a unique perspective due to the common membership of biographer and biographee in the Congregation of the Holy Cross. As told in the preface, the book is based primarily on many long and detailed interviews that Fr. Miscamble conducted with Fr. Hesburgh during the late 1990s at the Holy Cross vacation property in Wisconsin. Here are a couple of excerpts that give a sense about the book.

Earlier in the book, the biographer contextualizes Fr. Hesburgh’s early rise, an instance of the “ambitious life” in the subtitle, as followed:

Many a priest or religious when appointed to a position that they have coveted feel obliged to engage in a strange exercise designed to convey that they were truly surprised by their elevation. In Uriah Heepish tones of false humility they protest that they never sought the position but will do their best to serve well in it. Theodore Hesburgh rightly can claim that he never coveted the position of executive vice president because it had not existed prior to his holding it. But he is somewhat disingenuous in suggesting that he rose reluctantly in the hierarchy of Notre Dame–or, as he later put it, that he rose “mostly against my will.” He once conceded to me that although he remained surprised at how quickly he rose in influence after his early conflicts with the old Hugh O’Donnell brigade, by 1948 he could see that [Notre Dame president] Cavanaugh wanted him in administration.

Later, in a couple of paragraphs that reflects the biographer’s critical evaluation of Hesburgh’s leadership at Notre Dame: the “conflicted legacy” of the subtitle:

Father Hesburgh’s achievements in holding Notre Dame together, in advancing its reputation as a modern research university, and in seeking to develop it as a force for good in the world deserve praise. Yet one cannot ignore that his leadership over the period from 1967 to 1977 was not simply a triumph to be lauded. Any honest assessment must note that his creation of the modern Notre Dame came at some cost. To overlook this is to airbrush history by neglecting to examine central elements of the university, namely the faculty and the curriculum… As we have seen, Father Ted supported the religious and liturgical life of campus and encouraged students to engage in service. He maintained a somewhat conservative approach to student life and firmly resisted entreaties for coed dorms. He defended in loco parentis, understood as “caring for students and their inner-life values.” He cared deeply about the moral lives of Notre Dame students. As a good priest he truly worried for his students’ souls. He helped preserved the distinctive residential system and sense of community that gave the student experience at Notre Dame such a unique quality.

Given his forthright striving to maintain the Catholic neighborhood, it remains somewhat surprising that Father Hesburgh did not replicate those efforts in preserving and enhancing the Catholic “school” at Notre Dame–its intellectual and academic heart. Sadly, he did not. In consequence, while the center held at Notre Dame, it turned out to be somewhat hollowed out…

There is, of course, much, much more, including Fr. Hesburgh’s traditional piety; his view of the Second Vatican Council; his relationships with football coaches and provosts and professors; his dealings with trustees and donors; the influence that Fr. Richard McBrien had on him; and of course his role in the Land O’Lakes Statement, among other things. And that is only the first half. On the chapters about his relations with popes and American presidents, I invite you to read this short essay that the author wrote on the subject four years ago. It’s fair to call it a preview to the last four chapters of the book.  And here is a short interview with him that was published upon the release of the book.

My dissertation advisor was kind enough to ask the publisher to send me a copy of the uncorrected proofs back in January. As I read it over spring break in February, I could not help thinking back to something that I either read or listened to during the early 1990s, when I was still in college.  It was a lecture by the late theologian (and, later, cardinal) Avery Dulles about four different “strategies” employed by contemporary American Catholics in regard to the relationship between the Church and American society.  The strategies are:

Cardinal Dulles’ fourfold division needs some updating to reflect changes in the last quarter-century. Nonetheless, I think there is still a lot of truth about it today. Taken in this context, it is fair to view Fr. Wilson Miscamble’s biography of his late confrère as a moderate traditionalist’s interpretation of the life and legacy of a moderate liberal. (The “moderate” labels, of course, vary depending on the reader’s perspective.)  The biographer is respectful of and thoughtful towards his subject throughout the entire book. But there is no question that his interpretation of Fr. Hesburgh reflects an opposition between two different visions and strategies of post-conciliar American Catholicism.

One thought on “Wilson Miscamble’s new biography of Theodore Hesburgh”