I am up for tenure this year, and the preparation of the files made me think back to the pre-tenure review two and a half years ago. It was largely a positive experience leading to a largely positive outcome. However, I remember it most for what followed: a shift in the direction of my research agenda prompted by the dean’s review letter then a rejection email.

My pre-tenure review describes an ambitious agenda of seven articles. They belong to three different categories: (a) the history of South Vietnam, (b) the history of Vietnamese refugees in the U.S., and (c) pedagogy on core texts. Within (b) is a planned article on the Catholic refugees. I ranked these planned articles in priority and timing, and the one on Catholic refugees came last.

Four months after submitting the review, I followed up on my plans as described in the application and sent the first submission, a piece of intellectual history, to a journal based in Europe. Two months later, as I was working on another article, the journal informed me that they rejected it on the basis of evaluation by two anonymous referees. I read the evaluations and very much agreed with the referees that my submission needed a lot more work. I’d rushed writing that draft so I could get to the next one. It was a case of quantity over quality.  A few weeks before the rejection, I also received the review letter from the dean of my college (which was standard practice). The letter was quite positive but also encouraged me to “prioritize” my agenda for the next two or three years.

These back-to-back developments gave me pause. I was over-optimistic when writing the pre-tenure review, but now I needed to rethink my agenda. I could have spent time to revise the submission, or continued to work on the other paper. Both dealt with Vietnamese nationalism. Alternatively, I could focus on one category alone. After spending some time to check out primary sources and historiography, I decided to focus on the early history of Vietnamese Catholics in the U.S. It gave another meaning to the Gospel saying that the last shall be first.

It began a new journey that led to these articles. It included two short trips to Washington, DC for archival research, orders of many primary publications from Cornell and Yale, and reading a lot of secondary sources. I also edited two collections of ACTC conference papers and wrote a short article for a collection about the Republic of Vietnam that will be published in a few months. But the bulk of the time went into research, writing, and revision of these two articles. (I also submitted to an article on Marianism in South Vietnam that received “revise-and-resubmit,” and I’ve just begun to revise it.)

Briefly, the article in American Catholic Studies advances the concept “exilic Catholicism” to interpret the first waves of Catholic refugees. The term itself actually appears only once (on p. 33), but the point should be pretty clear after you read the article. I came to this concept mostly after a close reading of primary sources. But the secondary literature also helped, especially Gerald Poyo’s excellent book on the history of Cuban Catholic refugees. In my view, the exilic identity characterized the refugee experience from 1975 to approximately 1990. It then shifted to a transnational identity, but some features of the exilic identity have continued to define the Vietnamese American Catholic experience to this day.

Here’s the structure of the article. Academics and researchers may want to look at the survey of scholarship. Otherwise, read the introduction then go straight to the goodies on pp. 13-35.

Similar to my article on diasporic anticommunism in the Journal of Vietnamese Studies (JVS), this article is a good deal longer than a typical history essay. It employs mostly published primary sources It addresses the scholarship from other disciplines. It argues for the historicization of the subject at hand, and also historicizes a good deal. Nonetheless, it leans towards the conceptual and, like  the JVS article, may possibly serve as a lynchpin for a longer project or a book manuscript.

In comparison, the second article is a little over 10,000 words and uses mostly correspondences found in the archives. It provides new information in a chronological fashion. It tries to find an answer to a particular question. It is, in short, like most history articles. It appears in U.S. Catholic Historian, which organizes each issue thematically.

This article includes a lot of new information about the leadership and coordination of the United States Catholic Conference (USCC) to resettle refugee religious, priests, and seminarians. But it also seeks to answer, somewhat indirectly, the question, “Why has there been an outsized number of Vietnamese American priests and nuns?” There are several reasons, including those rooted in the history of Catholicism in Vietnam, but at least one reason is rooted in the experience of loss and separation. The fall of Saigon led to a profound fear among the Catholic refugees that they might lose their culture, that they wouldn’t have enough priests and men and women religious members to lead them in the future. Out of this fear came a greater communal promotion of and investment in new vocations from the younger members of their communities. The article concludes with a brief comparison of the Vietnamese situation to the Korean and Filipino Catholic immigrant communities that have followed different trajectories. 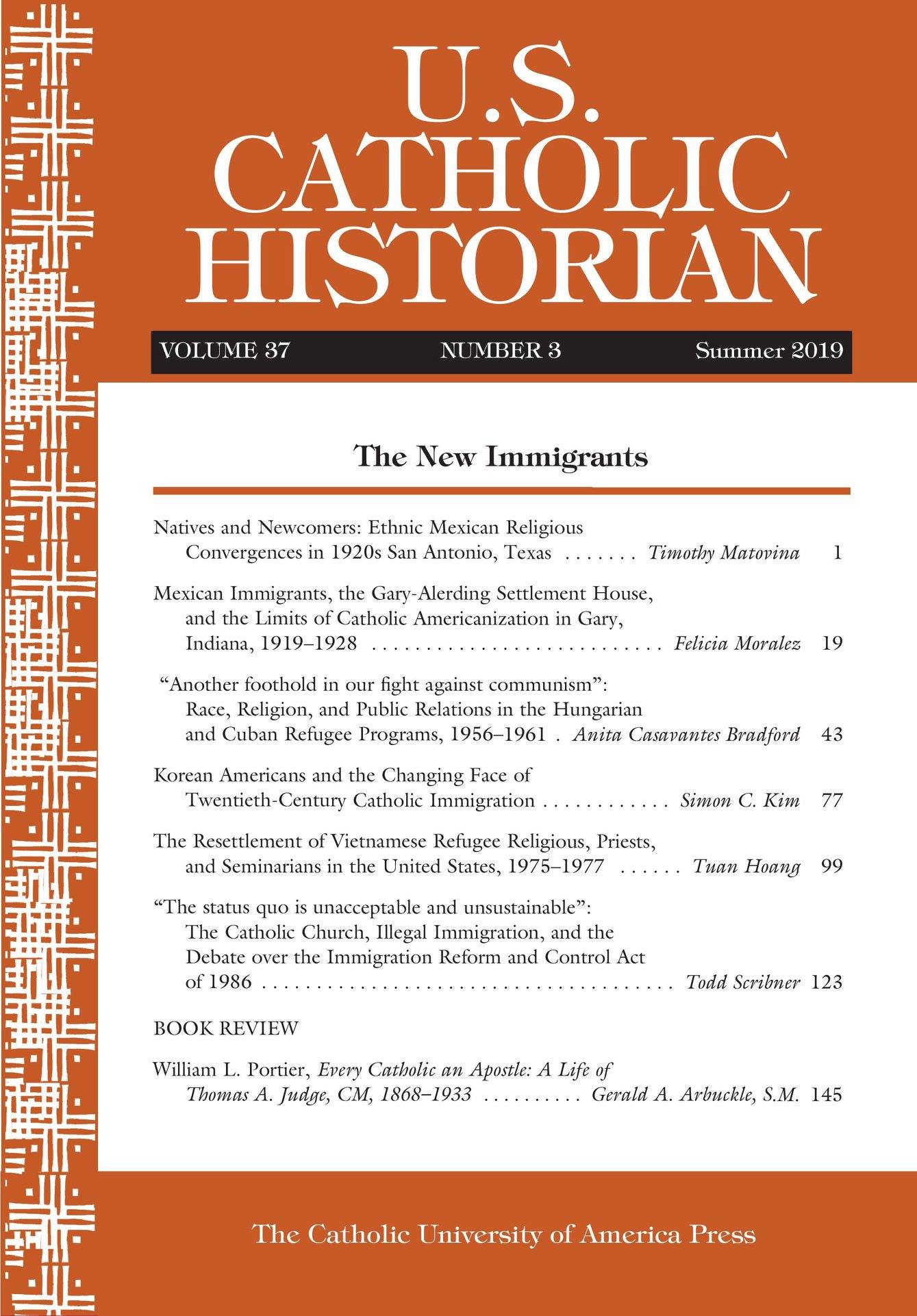 I’ve already thanked numerous people for their assistance during the research, writing, and revision of these articles. But I must repeat an appreciation to the Interlibrary Loan staff at Pepperdine Library and the staff at the archives of the Catholic University of America. Remarkably, the USCC documents were deposited, processed, and made available to researchers only two months before my first visit to the American Catholic History Research Center at Catholic University of America. Talk about good timing. The website didn’t yet list the boxes but the terrific staff sent me a list even without me asking.

The completion of my dissertation closed the first phase of my life as an academic researcher. The publication of these articles concludes another phase, one that carried some anxiety but, for the most part, joy and delight. The outcome is important, but the journey is more important. I loved the dissertation journey. I’ve loved the tenure-track journey. Now it is onward to the third phase. This new phase means further research about the Catholic refugees after 1975 as well as the Catholic experience in South Vietnam before 1975.  It isn’t possible to grasp the experience among the Catholic refugees without understanding the history of Catholicism in South Vietnam, which remains a largely under-studied subject.

It’s clear from my experience that tenure-track faculty ought to follow recommendations of reviewers and the tenure committee. It is hardly a perfect world, but there is something to be said about the collective and institutional wisdom. The window between pre-tenure and tenure reviews isn’t large, after all, and pre-tenure recommendations should help one determine the strategy for the next two and a half years. (I am of course speaking of liberal arts institutions similar to mine, not research universities because they have different expectations.)

Lastly, be appreciative of editors and referees who are prompt in reviewing your works, even when the outcome is negative. Promptness and professionalism help everyone. In my case, the prompt reviews and decision from the Europe-based journal sure helped me re-chart the road map fruitfully. It led me to a new and apt direction that utilizes my scholarly skills in the best way possible.