Last year, I cracked a smile when re-reading the “teaching philosophy” portion of my old job applications. Written in sincerity alongside more than a few academese clichés, it reflects a combination of idealism, limited experience, and, most relevant to the point of this post, a lack of foresight about my pedagogical development.

My application to Pepperdine, for example, lists “primacy of primary sources” among five headings under the statement of teaching philosophy. There are also “significance of writing assignments” and “power of lecture” and “joy of classroom participation and discussion.”  Then there is “commitment to students outside of the classroom.” All of these things were true, mind you, and four out of five remain true for the most part. (The category of lecture has changed the most.) But nowhere in that statement appears one of the most central roles to my teaching: being a motivator to the students in my classes.

To be sure, I sought to motivate students, if subconsciously, as an adjunct at Notre Dame, UC Riverside, and the Palm Desert Campus of Cal State San Bernardino. It came from conscientiousness as well as a desire that students would learn from me and the materials that I organized.  I motivated students with a combination of encouragement and challenge. I communicated it in the classroom, over email, and in comments typed in their exams and essays.

Overall, however, it was small stuff in comparison to the methods that I’ve employed and the time that I’ve spent since I began teaching full-time at Pepperdine. I’d like to think of playing motivator as an organic and integral part to the management of a learning community in and, at times, out of the classroom.

An example is having occasional class lunches or a Christmas party on the last regular day of instruction. Another is showing a dance video of mine before an assignment deadline. In many of my classes, I’ve made paper plate awards with humorously named awards and handed them out to each student at the last regular meeting before finals.  I regularly email an entire class with information, reminders, and words of motivation. (I’d err over the side of sending many emails rather than few, although the majority of emails should be short and, sometimes, akin to texting a short message.) During my first four or five years at Pepperdine, I typed very long comments on exams and essays. My evaluation points out the shortcomings as much as possible so that a student would know how to do better next time. But it also includes encouragement at the end. In the last two years, I have written fewer comments and, instead, went over them in one-on-one meetings during office hours. Not surprisingly, such meetings always provide an excellent opportunity to motivate a student.

The act of motivating students went up a notch after my university moved to remote instruction along with the rest of the world. Low was the morale among students. Low, too, was their focus. Having formed a community of learners during the first seven weeks of the semester, I was determined to maintain it in the midst of the lockdown. And I had to act fast and came up with a strategy that caters to student morale as much as it delivers the course contents.

Truth be told, one aspect of my strategy was simply to keep doing what I’d done albeit with more frequency. I did a couple of new videos to show and send to the class, and I re-edited several old ones of dancing and cooking. Believing that shared humanity plays a large role in motivation, I sent an occasional humorous photo of myself under quarantine. I also invited several staff members to contribute a short video with a message of solace and encouragement to the students. I showed these clips at the end of class meetings.

Another aspect of my strategy was setting up individual meetings within the first week of remote instruction. I still held synchronous sessions according to the schedule: twice a week at 8:00 AM, albeit shortened to about 60 minutes rather than 110 minutes when we were on campus. But I also dropped the attendance requirement and, instead, required each of thirty-six students in the history survey to meet with me twice: once in March and once in April. The majority of students still showed up for the synchronous sessions: my estimate is that three-fifths of the class on average showed up each time. And I remained available to talk with them after class. The Great Books classes were smaller–thirteen and nine students, respectively–and we met on Zoom synchronously and for at least 100 minutes each time. Nonetheless, I still required each to meet with me once at the end of March. I scheduled 20 minutes for each meeting in March and 30 minutes in April. Most meetings lasted for 15 minutes, but I believe they were crucial for the eventual outcome. In each meeting, I went over their work but also to check in on their morale.

There’s no question that those one-on-one conferences were  time-consuming, and it was possible only because (a) I didn’t have children at home or elderly parents to care for; and (b) there were 58 students in my classes, not 200. In any event, I believe those meetings benefited the students academically because they heard directly from me on how they performed in the last exam or essay, on what they should do in next assignment. And because they had a chance to share or brief me on their general wellbeing.  A couple of students later mentioned in the course evaluations that those meetings were very helpful to them. I can’t speak for others, but I think that their performance was better after I met with them. I think it was considerably tougher for them during the first three weeks of remote instruction, but it became a little easier during the last three weeks. The fact that the school allowed for up to eight credits to be CR/NC also helped them, and about 15% of the students decided to have my classes as CR/NC.

A third change was creating a series of mini-lectures for the history survey.  I posted them on YouTube as “unlisted” so that only my students could access them with the links. The primary goal of these videos was to guide students on analyzing historical sources, especially primary ones. I meant them to supplement synchronous meetings, which usually took half or two-thirds of the scheduled time.

The making of these videos also provided motivation for myself. Given the fact that my wife and I didn’t have children at home or needed to take care of elderly parents, I was in a better situation than many teaching faculty in terms of time and space. Still, it wasn’t difficult to drift during this most unusual time. So I seized on the desirability for these videos and ritualized the recording sessions as a way to motivate myself.

Therefore, I decided to put on a different outfit for each video and also put together a different “set” when recording each one. I relied on my filming and editing skills from making those dance videos for sharing with friends on Facebook. I used one half of our living room as a makeshift recording studio (photo on top). My wife still went to her workplace during the first two weeks of online instruction, so I recorded after she left home. Once she stayed home, however, I usually did it in the morning before she took over the living room for her own work.

Here are the photos of each recording session, which usually took an hour, half of which was spent on putting together the set. (Since most of the analysis is voice-over, only one-quarter of each video shows the makeshift studio.) It became a ritual of sorts, and a form of motivation in that there was something to me to look forward every other day or so. 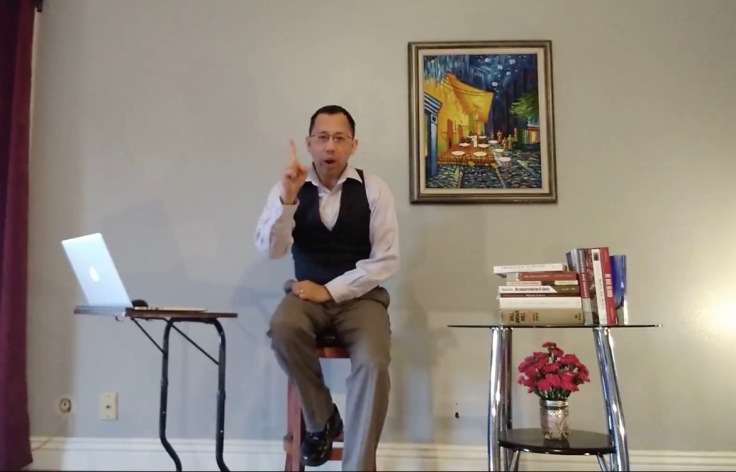 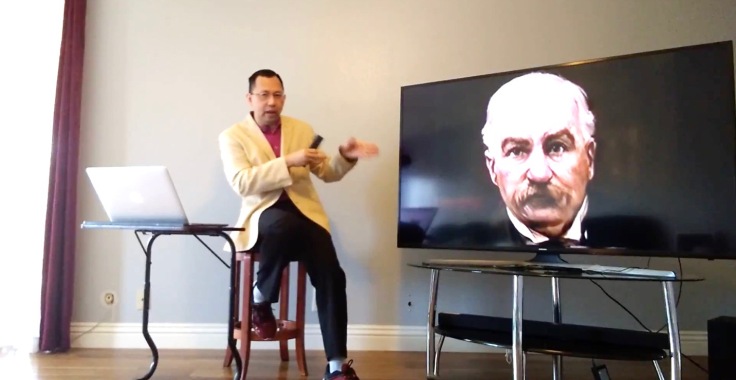 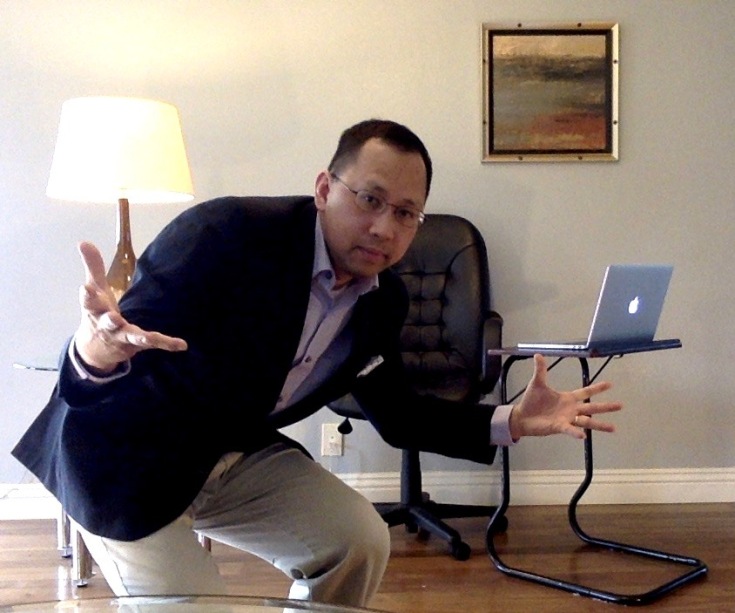 I dug out new sneakers from the closet for #4. 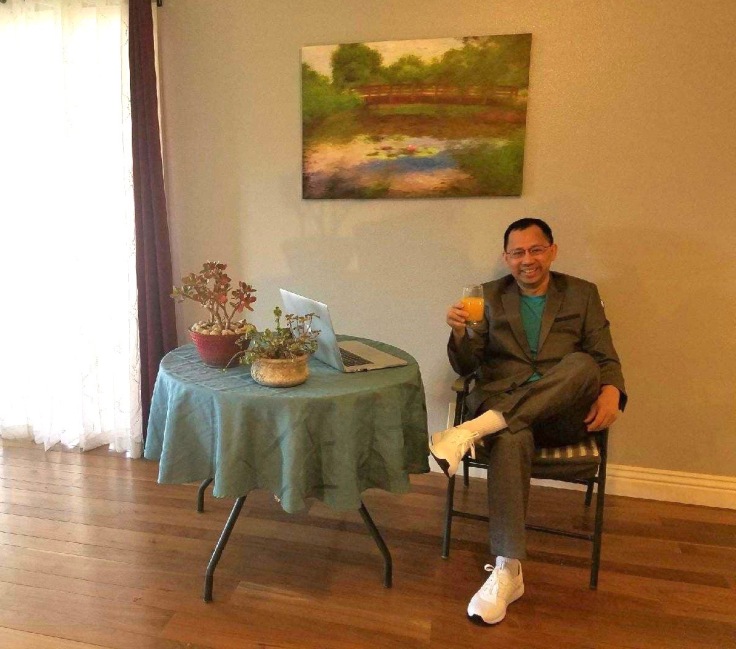 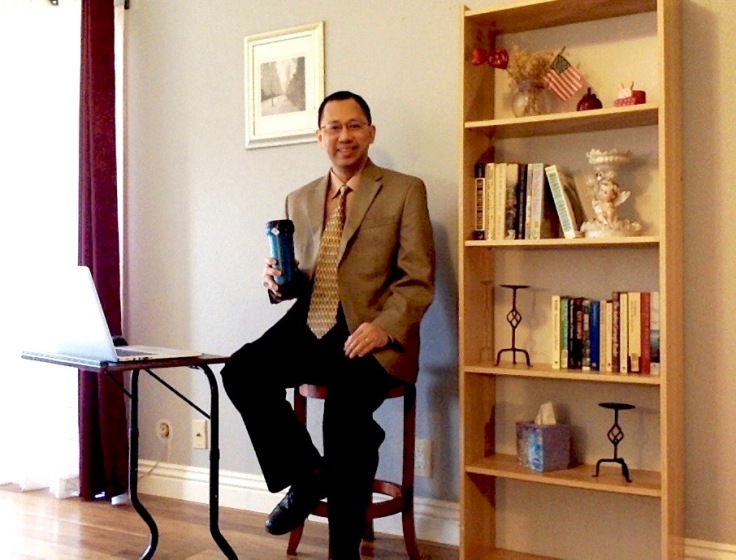 Italian immigrants was the subject of #6. 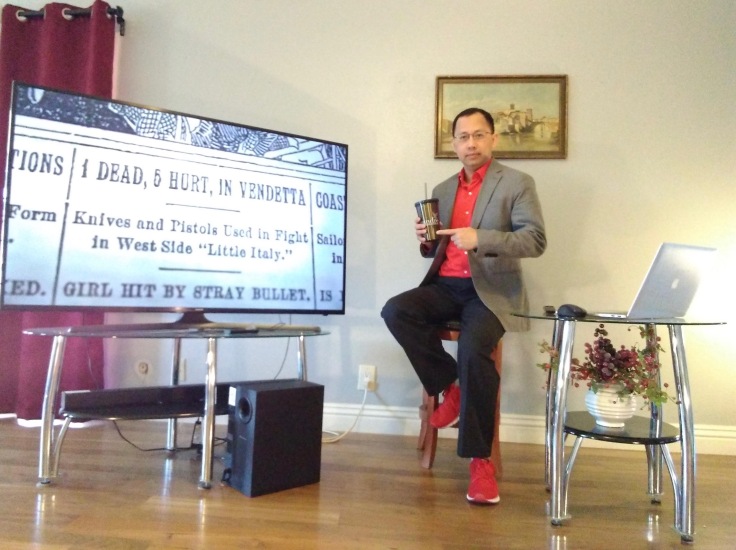 Video #7 was the same set as the photo on top. 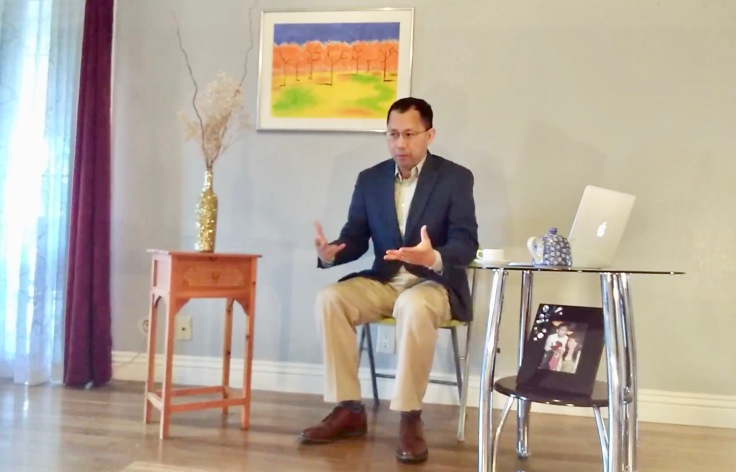 I took it to the backyard for a change. 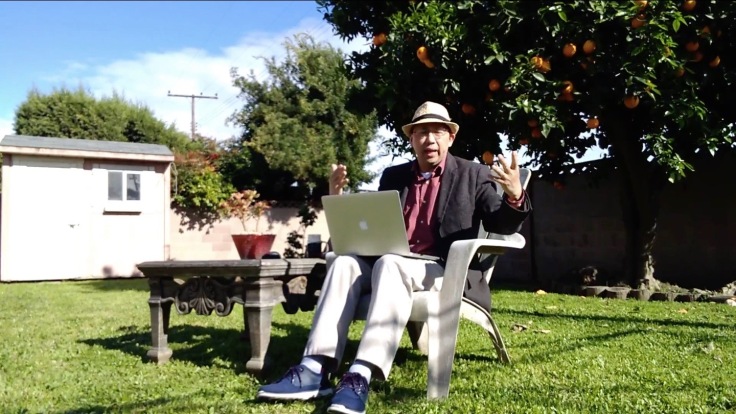 A most formal look for #9, which was about American imperialism. 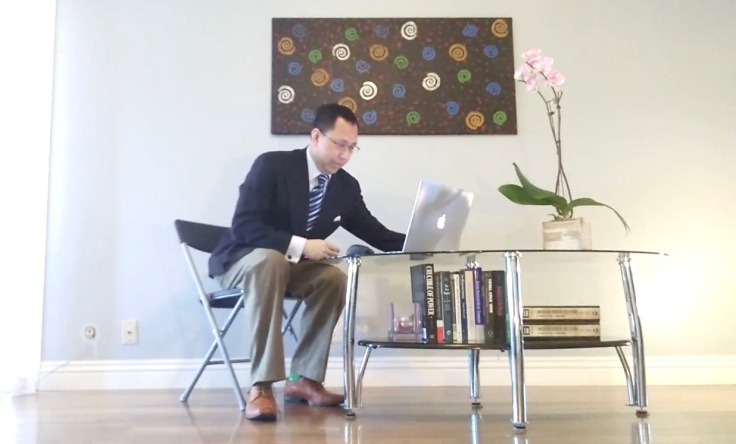 Running out of props, I went to one of the bedrooms for #10. 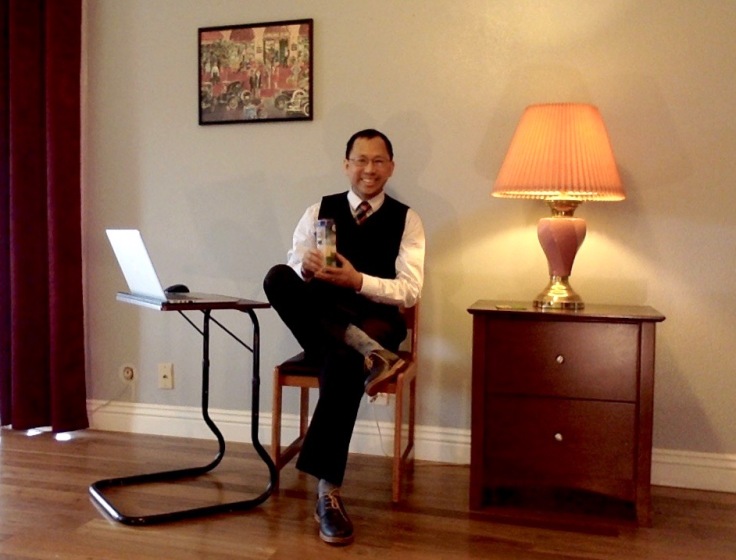 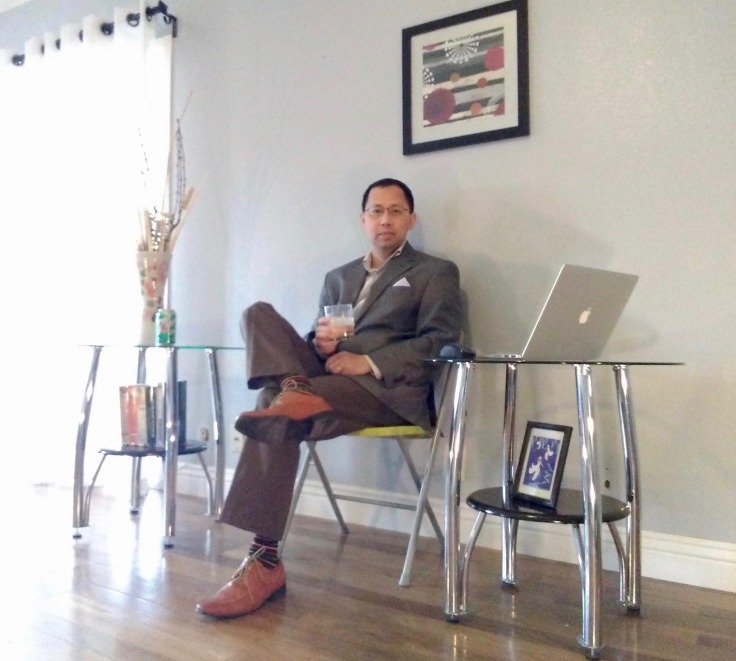 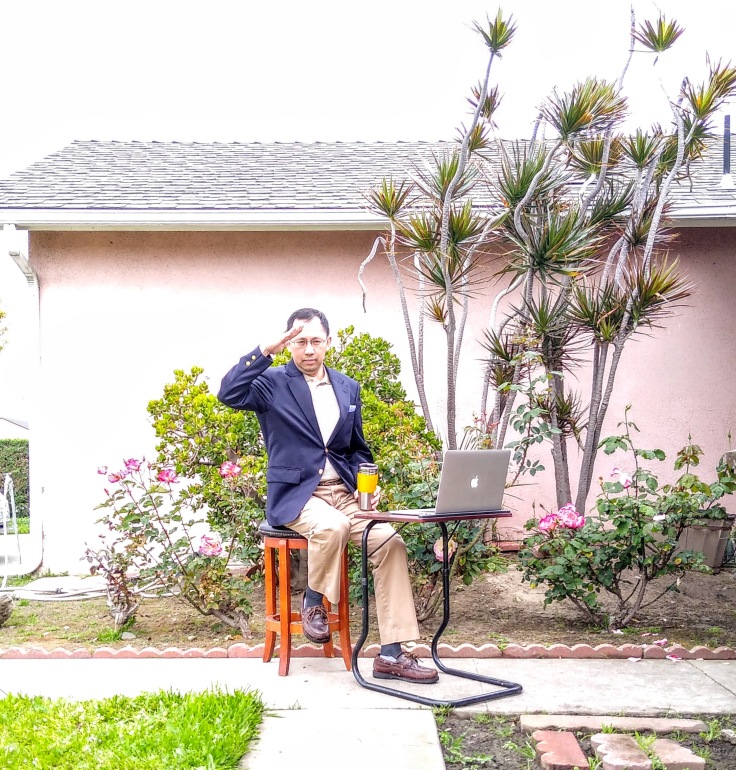 Having some soup after recording #13. I dabbed for the first time and Pepperdine Instagram picked up that photo. 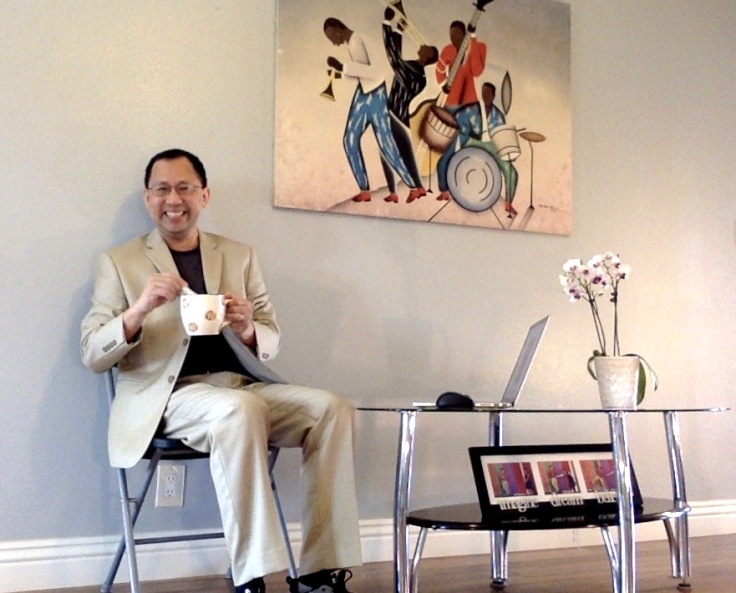 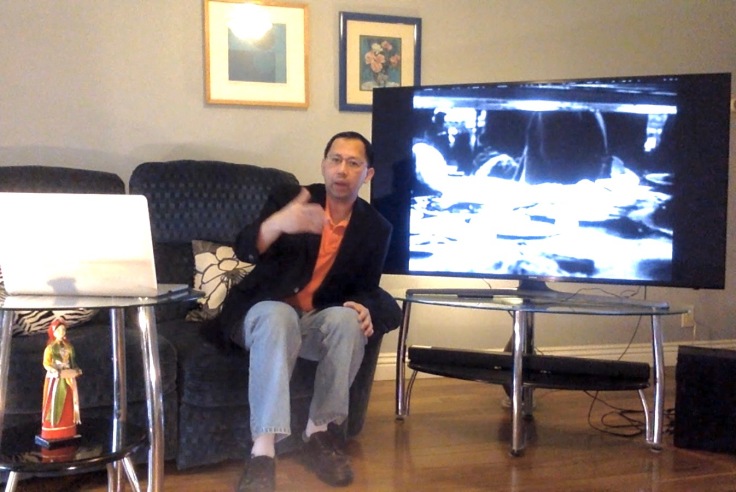 Finishing the last subject on the twentieth century in #16. My wife cut the trumpet lilies from our front yard for Easter. 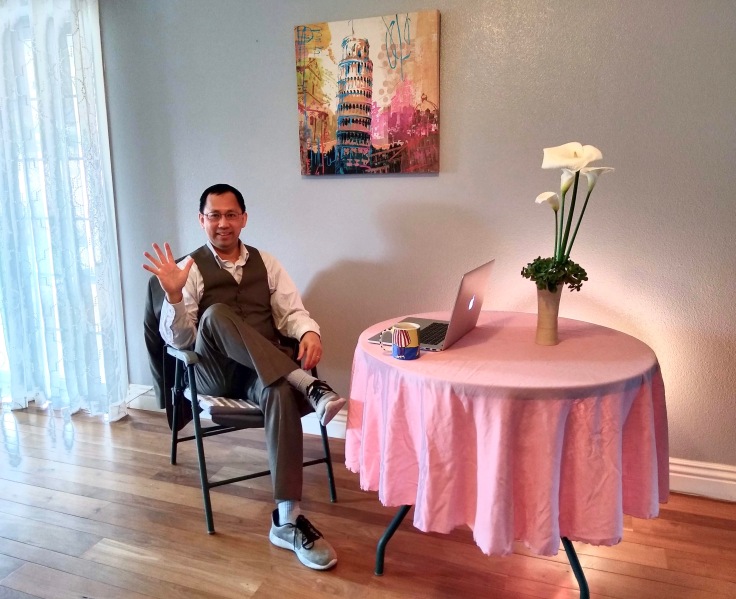 The last video is about the final exams, and it needs an explanation. For the last history quiz, I included an extra-credit question in the form of multiple choices: Where will Hoang record his last mini-lecture? There were four choices, but I threw in (e) as a last-minute joke.

Having planned for (a), I was surprised that the top choice was (e). One student even wrote, “I’d be sad if it isn’t the rooftop.” 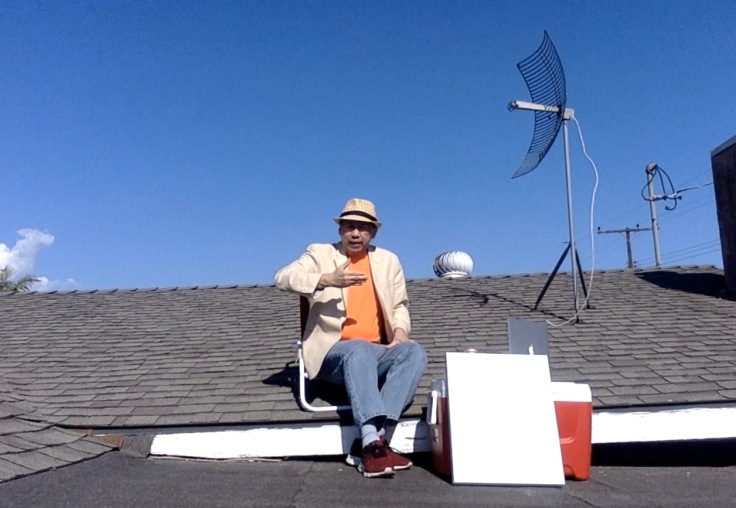 Gotta give people what they want!

I was exhausted at the end of the semester, but also happy. In fact, I returned to the roof a week later for the following video.