Quarantine art from my students

My appreciation to all students that gave me permission to upload the quarantine recreations and videos in this post!

I am teaching HUM 111, the first of a three-course humanities sequence at Pepperdine, for the first time. Since it is summer school, I’ve necessarily modified methodology and course materials to meet the dual challenge of remote and daily meetings. We are at the mid-point of the course. There are still two weeks left, but at this point I am pleased that it has gone as well as I could have hoped for.

Among the modifications is the “fun assignment,” which requires each student to make two things, one during the first two weeks and one during the last two, that are at least tangentially related to the contents of the course. I envision this assignment to be light-hearted to balance more rigorous requirements of weekly forum posting, small group discussion, and essay writing.

A student could, for example, create an account on one of the social media for a character from Iphigenia in Aulis or the Iliad, and add relevant illustrations and captions. Or, a short video related to a theme of Stoicism found in Seneca’s letters. Or, a leaflet parodying the rules of religious orders by Sts. Benedict, Francis, or Clare.

Thus far, a number of students have created accounts on Twitter, Instagram, and other social media for Achilles, Agamemnon, Clytemnestra, Iphigenia, and Hector, among others. They have posted tweets, photos, and captions that are funny and/or closely tied to reading materials.

I’ll credit myself for getting it started with this dance video. I made it to motivate students before they wrote the first essay, but also to provide them with a concrete idea about the fun assignment.

Within hours, the first creation arrived in the form of TikTok videos. Four other students did the same over the next few days. There was enough for me to mix them into the following video, then to show it to the students before they write the second essay.

Another student made the following video on YouTube. Like the student at the top of this post, she enlisted the help of her family puppy to recreate Achilles’ grief over the death of Patroclus and fury against Hector. (Her sister worked the camera.)

In addition to readings, I have included a number of artworks from Classical antiquity to the twentieth century that illustrate and interpret some of the episodes in the texts. Taking after the recent phenomenon of quarantine art, I’ve invited students to consider recreating any of these paintings. Several of them have responded to this invitation.

The student below, for example, uses household items and plays all three characters from a fresco painted by Tiepolo (1757). The scene comes from the beginning of the Iliad, when Achilles is furious at Agamemnon’s decision to take Briseis. He draws his sword and moves towards the supreme leader of the Achean army, only to be pulled back by Athena who, hilariously, grabs his hair. 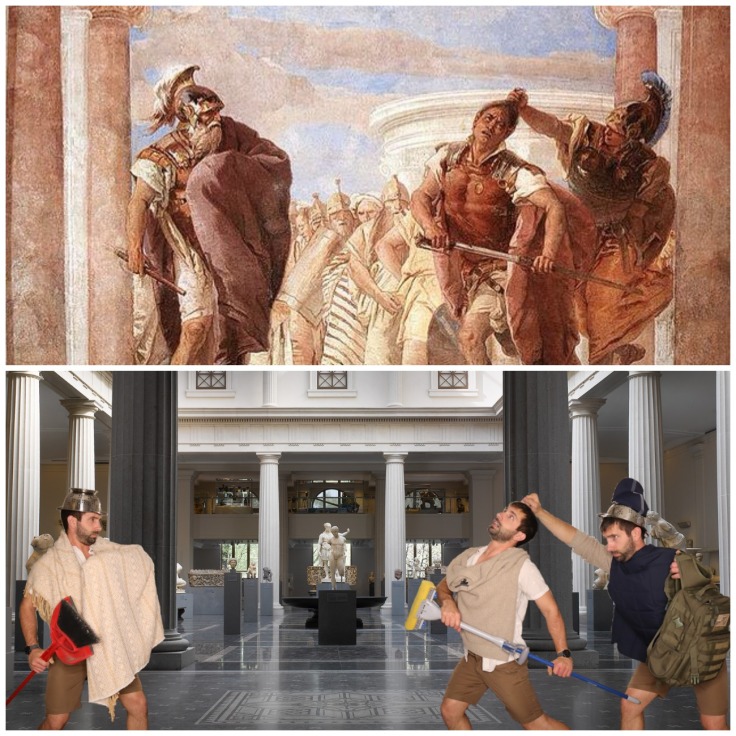 The rage of Achilles is also the subject of Jacques-Louis David’s painting (1819, albeit about Iphigenia in Aulis). Two students took after this painting. The first models herself as all four characters.

The second student does Agamemnon then Photoshops her pets as Achilles, Clytemnestra, and Iphigenia.

Going back to the Tischbein painting of Hector on top, this student also incorporates her parents and their puppy. 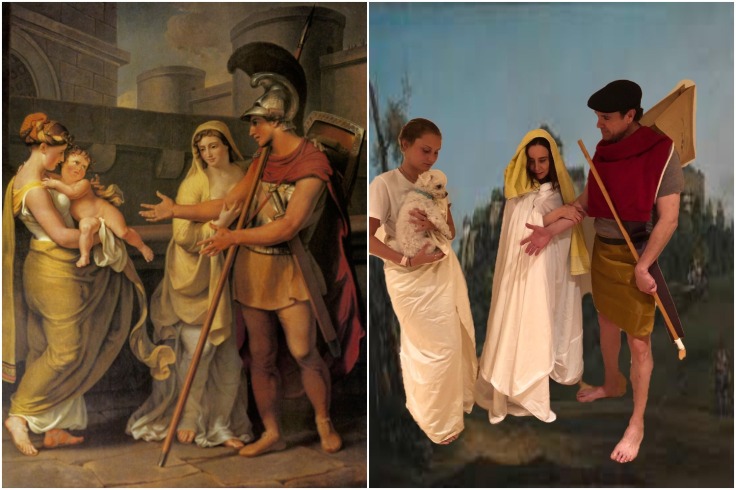 Moving forward to Books 18 and 19, the following student does Thetis and enlists her siblings plus their dog as deceased Patroclus. They recreate the painting about Achilles’ grief by Benjamin West (1806).

Last but not least, this student plays Hector while his sister Achilles to recreate a painting by Rubens (1630s) about the end of Book 22.

Not bad, not bad at all.